There is one significant aspect of our town cemeteries that has managed to evade the conversation. Burial lots can be purchased at the time of need prior to a funeral, or they can be purchased in advance. These are known as “perpetual care” lots, and it is not uncommon for people or families to make these purchases, sometimes in quantity, for the future.

We have already looked at the usage of cemetery lots in town by examining the annual interment data and finding a relatively constant average 22 burials/year over many decades.  But what we have not looked at is how quickly new lots are being purchased.  That is, how quickly are we purchasing the unsold lots in our existing Amherst cemeteries, and how quickly are we using up those which were already purchased?  Understanding these numbers lets us understand the demands our town places on our cemetery land reserves.

This is a relatively straightforward question to answer, at least during a span of time over which we can get numbers. The fine people at our Department of Public Works have been very patient and most helpful with my requests for information. As it turns out, one of the annual reporting duties of the DPW is to notify the NH Attorney General’s office of the sale of cemetery lots (the AG’s office oversees cemetery trusts), so this information is already tabulated on an annual basis. Unfortunately there are some years (1982-1991) for which the numbers can’t be readily located in town records (these records used to be maintained in other places and they would seem to have either been lost/misplaced or were perhaps never recorded). I may request copies of these reports from the AG’s office, but I digress. What data I have now will suffice.

The graph below plots burials in Amherst cemeteries (in blue) during the years for which I was able to obtain lot purchase data (1971-2008), and also the lot sales data (in red). Note the 1982-1991 lapse in red points on the graph – the missing record years. It is, I think, reasonable to assume the trend bridging the gap here. In any case, the sale of new lots is a surprisingly small number, with the average over more than three decades being 7.6 cemetery lots sold per year. 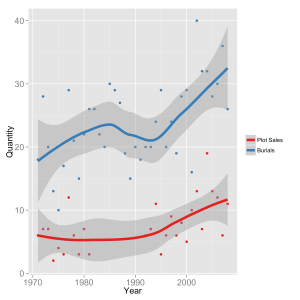 If you are the sort of person who sees value in histograms, we can view it that way too.  If you aren’t used to histograms, what this shows is a count of how many times each number shows up in each set.  In other words, how many years there were sales or usage of a given number of burial lots.  You can see that there were six years where six lots were sold (red), and also six years where 20 lots were used (blue) and each set peaks very close to its average lots/year value (7.6 for lots sold, 22 for burials). This is just another illustration of the separation between the number of lots used and sold each year.

These data give us some insight into how our cemeteries are used. It is quite clear from the above graphs that more burials are performed than there are sales of new lots each year. We have no good way of knowing if the lot purchases were made for immediate use, or if the lots were bought to be held in perpetual care. But let us assume they were purchased for immediate use.  Now the difference between two data sets establishes the lower limit to the number of previously sold (perpetual care) lots used for burial each year. This is graphed below.

This is useful because it can be used to calculate the lower bound on the percentage of burials in Amherst which draw from the previously sold, or perpetual care, lots, as plotted below.  The average value is 68.3%.

Percentage of Amherst cemetery burials using previously held (perpetual care) lots.  Note that this is a lower bound because we are assuming that lot sales go to immediate burials and not to perpetual care.

What these data indicate is that an average of at least 68% of burials in Amherst each year are performed using perpetual care lots (i.e. lots which were not purchased in the burial year). The lot sales numbers from DPW indicate that 7.6 new Amherst cemetery lots are sold on average each year, which is the actual demand for new cemetery land in Amherst.  As the town’s population surpasses 12,000 today, I will admit to being rather surprised by this.

The obvious followup question here is how many unsold plots remain in our existing cemeteries?  This is one which can only be answered by the DPW.  The other question is what is the difference between the number of deaths in town each year and the burial numbers.  Understanding this would help us to interpret what we see here.