Last year I served my first term on the Ways and Means committee for the Amherst School District.  During budget season, the committee reviews a very complicated budget and scrutinizes it, submitting questions to the administration, meeting with various district employees responsible for budget areas, and reviewing spending plans for efficiency and value.

As I begin to prepare for budget season this year, I thought it would be a good exercise to review some information from previous budget years to understand how the budgets have changed.  This is important to understand as the Ways and Means committee is somewhat dynamic in its makeup.  That is, appointments are for three year terms, and so information has a way of quickly becoming lost as people cycle through their turns on the committee.  It makes sense to me to share this information publicly.

A little bit of background.  The district annually publishes a summary of its proposed budget and revenue assumptions.   This is its “MS-26” file, and they are published online on the district’s finance page for each fiscal year.  This document gives a very high level overview and breaks spending down into coarse categories.  Things like “regular programs,” and “special programs.”  These are the totals for all of the spending categories inside of the  regular and special education programs in the full budget, and they’re the two largest categories in the budget.

So let’s have a look at the six largest budget areas (in 2008) and see how they change over time.  These areas are regular education, special education, support, operation & maintenance, administration, and SAU management services.  The graph below shows these numbers, as taken from the MS-26 forms mentioned previously.  Now each year when these forms are published, they show the actual spending numbers from the previous fiscal year, the appropriated numbers in the current budget, and the requested numbers for the budget to be voted on.  The numbers in the graph below are actual numbers with the exception of the last two years, which fall into the “appropriated,” and “requested” categories.  Go ahead and click on it for a larger version.

Here are the individual categories shown separately each year.

It would seem that in 2009 much of the money that was previously in the “support” budget was shifted into “regular” and “special” education budgets, and so after 2008, support is a relatively minor budget area.  That would explain the large percentage changes in those education spending  budgets.  Other than that, these combined budget areas show an average total of a few hundred thousand dollars per year annual growth in spending, with single digit percentage changes in each budget per year.  There isn’t anything else huge that jumps out at me.

Total spending, seen below, increases at about the same rate, with the outlier being 2009.   I’m not sure what happened this year, but we spent a few million dollars more than the trend would otherwise lead you to expect.  Large contributions to the increases in total spending each year come from uncontrolled health insurance expenses (something I addressed during my campaign for school board last year, but I digress) and the state of NH’s downshifting teacher retirement expenses to the districts.  I plan to dig into these budgets to get these numbers (it isn’t as easy as you might think), but I don’t have that done yet.  (Note:  It is done now.)

So spending is one thing, but there’s something else we haven’t thought about yet.  When we think about something as complicated as a school district, it can be instructive to think about it as something simpler – a black box.  Into the box go things like students, staff, and money (all easy to quantify), and out of it comes something somewhat less easy to measure – education (a topic for another time).  This sort of simplification can let us more easily think about efficiency in terms of output as a function of input; efficiency being a word too infrequently used when we consider publicly funded enterprises.

We just looked at the money input, now let’s consider the student input.

Below is a graph of the enrollment in the Amherst School District since 2002.  These numbers come from the New Hampshire Department of Education.  Notice that enrollment has dropped every single year since 2005.  Now go back and look at that spending graph above.  Sure, education spending has been relatively flat, but what does that mean when you have a decreasing enrollment?  This graph gets bigger with a click as well.  It is instructive to have a good look at it as it is what is happening in our schools right now.

I want to take a small aside here and try to understand why this enrollment decline might be happening.  There are likely to be a number of factors behind it, but it would seem to me that the birth rate should be a sensible thing to look at as an enrollment predictor.  It would be nice to have more enrollment data to do a correlation study with, but I just don’t have them.  Birth rate data, on the other hand, is somewhat easier to get.  Not for the state, of course, that would be too convenient.  Plotted below are the US birth rates (live births per 1000 people) since 1960, and plotted along with them are US economic recession years (in red).  It isn’t too surprising to mee to see that all of the significant drops in birth rate coincide with recession years.

Take note of something interesting.  You would expect a 5 year lag between birth rate changes and their impact on enrollment.  2000-2001 was the last recession drop, which is in line with our 2006 enrollment decrease.  Both data sets are roughly flat the few years prior to the drop as well.  If this means anything, it should allow us to make plans for future enrollments in the public schools. 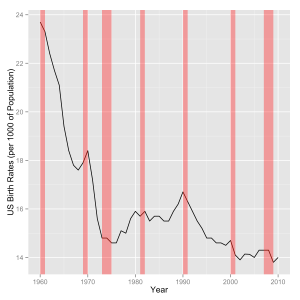 US Birth Rates since 1960. Recession eras are shown in red.

Now since we have both spending numbers and enrollment numbers, let’s take a look at the all important “total spending per student” number.  The school administration officials don’t really seem to like this number.  It is true that the Dept. of Education uses a different algorithm to calculate per student spending.  This is because they only use education spending, as opposed to total spending, in their calculation, which allows them to compare districts based on education costs alone. 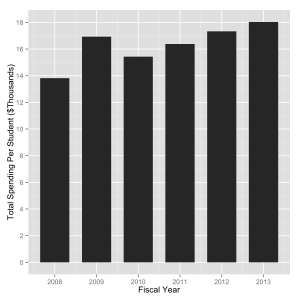 The total spending per student for the Amherst School District.

The District has not managed to control costs.  That’s about a 30% increase from 2008 to 2013.  Granted, things like teacher retirement costs are out of their control. And for the first time in many years, next year’s ASD budget (FY14) did not increase.

My question is what actions can be taken to get the primary budget increase drivers under control?  And the most important question that needs to be answered, have we realized any additional educational value for those increased costs?