With all the work I’ve done to better understand how and where we spend money in Amherst School District, it was time to do something with it and press for some changes.  My intention is to refocus the budgeting process before it happens, rather than respond to it once it comes out.  I’m hoping the proactive approach is the more effective one. That in mind, I summarized my budget evaluation (which I’ve done in bits and pieces here) and questions/recommendations in some slides and met on Wednesday (7/17/13) with the Superintendent (Peter Warburton), the Business Administrator (Betty Shankel), and the ASD School Board Chair (Peg Bennett) to review them.

It was a good meeting, the contents were well received, and once they have fully digested them, we will meet again with a larger group to review them and their responses to the questions and recommendations. I think I got my point across that I was there for a cooperative meeting and that I wanted to drive the discussion on where W&M sees issues that need to be addressed earlier in the process than has been typical.  We are supposed to be the check/balance in this process and the points made were, I think, well received (we were encouraged to push them on spending issues).  I openly invited them to suggest other metrics to judge value if they feel I have selected incorrect ones (mostly because last year’s W&M committee meetings did not produce any metrics I was looking for).  And in general, that if they feel that the numbers for certain spending areas are justified (special education and teaching coaches come to mind)  in how they deviate from state averages or other town numbers, that the case needs to be made for them.

These are the slides.  I talked over them quite a bit in the meeting, but hopefully the messages are clear.

Value is a word that we should probably use more when it comes to the school district.  We talked before about the black box approach to understanding complicated things.  We take something complex, like an electronic circuit or a whole school district, and put it into a big black box and simply look at what goes into it and what comes out of it, and use those to learn what it does without having to be too concerned with the details of how it all actually happens (for now, at least).  This is a great way of getting an overall look at how something behaves, and we can use it to look at its effectiveness, or value.

A useful way to think about value is to look at input/output ratios.  You do this all the time, even if you don’t realize it.  Into your car you put gas, out of your car comes miles of travel, divide the two and you get your miles/gallon ratio.  In this case, a higher number means greater value – more miles out of a gallon of gas is greater output for every unit of input and therefore more value.  We can use this same approach with our black box model of the school district.  Into our school district go money, students, and staff, and out come educated students.  The measure of the amount of education the students have is currently done, for better or for worse, with standardized tests, which is a reasonably good way to look at groups as a whole.

Previously we looked at NECAP test scores over time.  But the word value often refers to comparisons made with money – how much of something do we get for our dollar spent.  So lets look at one of the measurements of education that we can make, average NECAP scores and proficiency numbers, and compare them with the dollars it took to get those scores.  In order to do this we have to get rid of the silly NECAP convention of adding the grade level in the hundreds place of the scaled score, and just use the actual test score numbers which go from 0-80.  I don’t have budget numbers for all of the years that I have NECAP scores, so there are a few less years on these graphs than there were on the ones you saw with just NECAP results before.  And because we usually like to look at large numbers instead of lots of decimal points and zeroes all over the place, we will flip the ratio so that the output is on the bottom of the fraction.  This means that instead of points/dollar, we’re looking at dollars/point, and value goes up as the numbers go down.  With all of that in mind, here are the dollars per student-NECAP score numbers for Amherst School District from grades 3-8 for 2008-2012 in reading and math.  We get these by taking the $/student numbers and dividing them by the mean scores for each year. 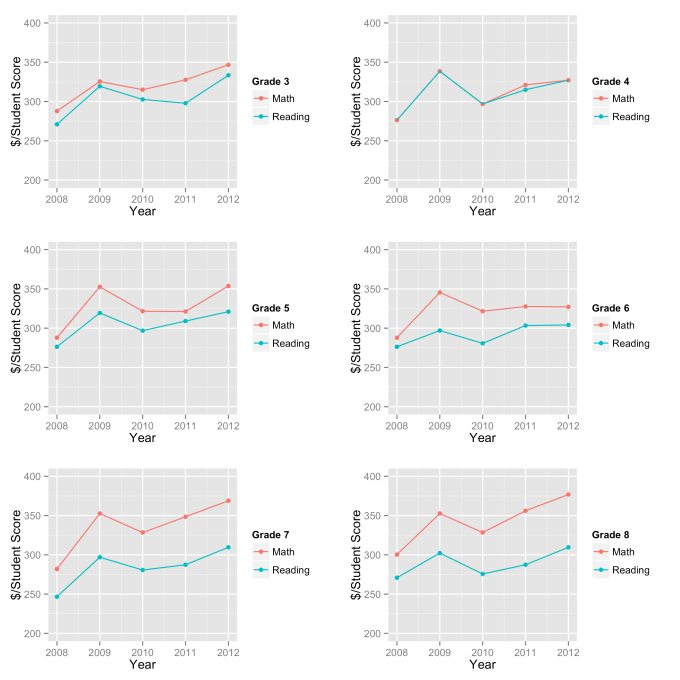 Amherst School District spending per student per NECAP test score for reading and math for grades 3-8.

2009 was the year we had a one-time $2 million bump in the budget.  What we see here is that over time, in general, more dollars are required for every point scored in math and reading.  In other words, value is going down as the years go by.

We can look at these in a slightly different way.  Rather than the cost/point each year, we can look at the test scores and how much we spent per student in the teaching year.  It is the same idea as above, but now we don’t necessarily care which year it is, only what the spending per student number was that year.  Per-student total spending was gone over in a previous post if you want to look at those numbers and how we get them.

This look gives us a sort of price elasticity curve, if you’re familiar with economics.  That is, looking at the numbers this way we see how the amount of education changes as the cost of educating a student changes.  First the NECAP average scaled scores, grades 3-8, math and reading. 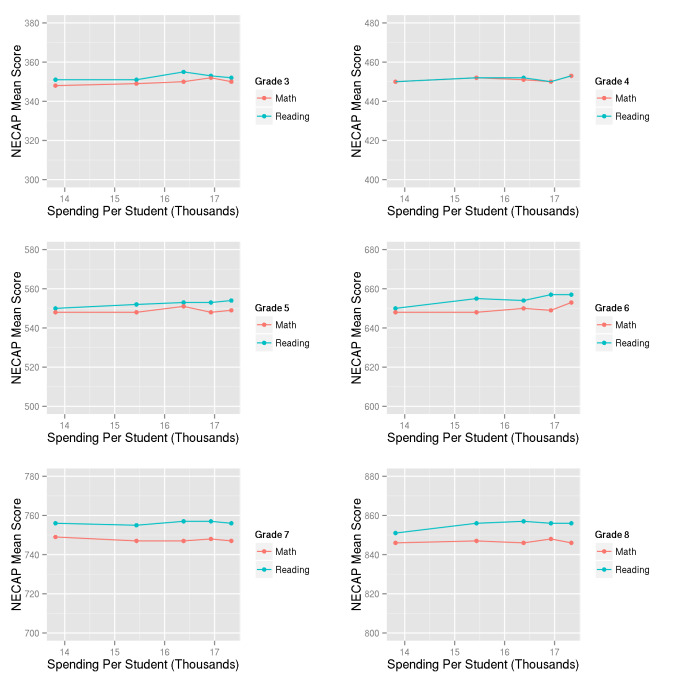 ASD NECAP Math and Reading score as a function of per student spending.

NECAP reading and math scores don’t seem to be very elastic. That is, they don’t change much regardless of how much money we spend.  What about the percentage of students who test proficient or above? 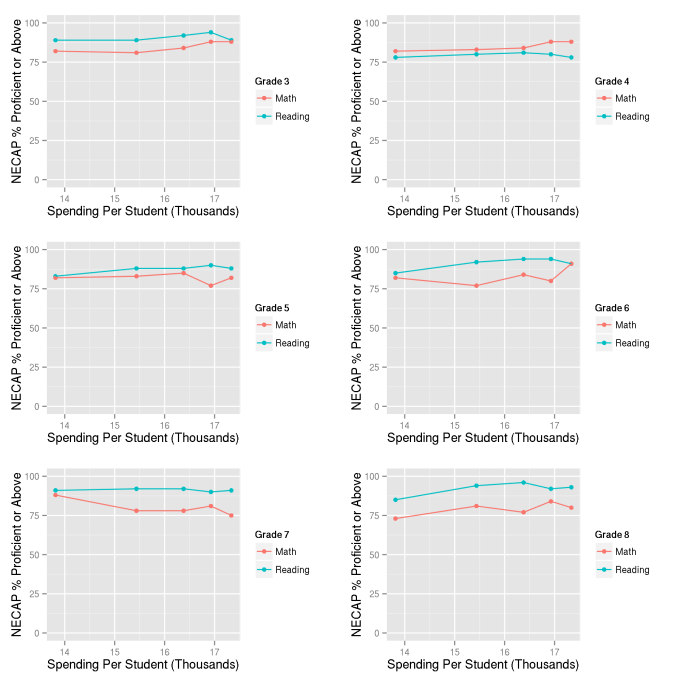 ASD NECAP student proficiency as a function of per student total spending.

No matter how we look at the numbers, it is clear that the increases in spending haven’t given us any increase in educational value.

The key to understanding why this is so is to look at how the money was spent.  So we have to dig a little bit into the budget.

There is a good reason why the extra spending we do each year doesn’t give us a bump in education – it isn’t spent on education.  Since  2008, the average annual budget increase is $417k.  The average increase on insurance and NH Retirement is $395k.  That is, the spending increases each year go overwhelmingly into health insurance premiums and the NH Teachers Retirement fund. 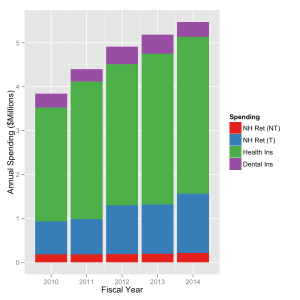 What this means to me is that the top priority this year is to get control over these costs.  I am certain that the school board and the administration have plenty of programs they would like to implement, but can’t because of budget constraints.  I know from talking with people in town that they want tax relief.  Making this happen will take creativity and leadership.  I have high hopes that we are up to the challenge.